Since I'm member of the steering committe for the Devoxx 2009 conference it's my pleasure to inform you guys on what's comming...

First of all this year's Devoxx is in NOVEMBER, yes 1 month earlier, from the 16th to the 20th, again at the excellent venue: Metropolis Antwerp.

So far following speakers have confirmed:
For people interested in doing a session at Devoxx we have openend the Call For Papers application for BOF's Quickies and Tools in Action: CFP (firefox only)

Hope to see you there!
www.devoxx.com
Posted by Jo Voordeckers at 2:06 AM No comments:

JavaFX, Flex and Silverlight are looking at the wrong enemy

HTML and JavaScript were never seen as a real competitor in the RIA space given it's current limitations, but with the new featureset for HTML5: canvas (2D drawing), sockets (P2P communication), multithreading (background processing), audio/video, local storage... it might very well become the RIA platform of choice given today's huge developer base.
HTML5 won't be released for a couple more years, but Google and Apple are betting heavily on it so SunOracle, Adobe and MS better keep an eye on it as well.
Link: http://www.computerworld.com/action/article.do?command=viewArticleBasic&articleId=9134422
Posted by Jo Voordeckers at 1:42 AM No comments: 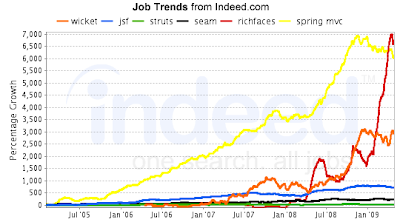 All in all I would definately choose Wicket again, it just makes sense and I've never had more fun developing for the web in Java!
Posted by Jo Voordeckers at 1:45 AM 53 comments:

I've been using Safari 4 beta for a couple of weeks ever since I found out it supported Apple's Java 6 'update 10' developer preview. As a JavaFX developer this has been an important improvement we've been waiting for since last year's JavaOne.
Since I'm mostely a Firefox user for all it's great plugins, I wasn't thinking about switching to another browser anytime soon. But after using Safari 4 beta for a while I was pleased with the speed, stability and CPU & MEM consumption, the latter is an area where Firefox has some huge issues.
So since a few weeks I've ditched Firefox and converted to Safari, and it has been great... until yesterday when Safari 4 has been updated to the final version. It has already crashed 4 times today, while just browsing GMail, blogs, etc... Safari 4 beta never crashed...
Posted by Jo Voordeckers at 6:21 PM 2 comments:

Last week I attended JavaOne 2009, this time only as attendee, so no stressy last minute demo and slide editing. Like last year it was awesome, having all the people from the Java community in one place is just amazing, especially the hallway conversations and afterparties are my favorite part of the conference.

As expected JavaFX was big news again, with finally the unveiling of the "designer tool", Tor Norbye did a few entertaining demos of this very promising tool. Next to that it was impressive to finally see JavaFX running on a few mobile devices (HTC Touch Diamond and a device from SonyEricsson) and a flatscreen TV by LG with more than acceptable performance. Although many speculated on JavaFX's future, Larry Ellison made a clear statement during the show that he likes JavaFX so much that he wants to continue the investment and even do a rewrite of OpenOffice with JavaFX. I'm not sure if that's a good idea, but these statements took some pressure off of the shoulders of our friends at the JavaFX team.
Not very surprising was the unveiling of the Java Store, think Apple App Store for iPhone and iTouch, but then for any type of Java application. It seems like we are finally getting a component marketplace for us Java developers.
Last but not least a couple of days before JavaOne the next release of JavaFX 1.2 was released, with as biggest improvements: performance, documentation and API cleanup, new components (codename Caspian) and charting. For more info about what's new in 1.2 check out Stephen Chin's blog. JavaFX engineers Richard Bair and Jasper Potts annouced a new blog: FXExperience where they'll teach us some neat JavaFX tips and tricks.
It hasn't been communicated much publicly, Tor Norbye mentionned it briefly during the JavaPosse BOF, that a new graphic subsystem is in the works to replace good old AWT and Swing. This will give us an even faster startup time for JavaFX applets and better performance by directly interacting with the hardware of your platform. The ETA for all these JavaFX goodies is 'end of the year', so will we get a release at Devoxx as they did with JavaFX 1.0 last year? Hopefully they realize Devoxx is 1 month earlier this year ;-)
This year cloud is also big news. First we had Amazon AWS (EC2), then Google App Engine and now Sun is joining the party. Java developers will get an API to interact with Sun's cloud infrastructure and get access to virtualized hardware just like EC2 and with a similar pricing model. Very exciting times for startups!
Like every year I try to improve my book collection... So this year I picked up Clean Code by Robert C. Martin, an excellent book that teaches you best practices in writing clean (Java) code and how to keep it that way. Alhough you're probably already aware of most of the best practices described in the book, it reminds you why we're putting up with this effort. It's also usefull to have these arguments at hand when you need to convince your boss or client that unit testing and refactoring is so important. Next to Joshua Bloch's Effective Java 2nd edition, my choice for book of the year.
Posted by Jo Voordeckers at 5:02 AM No comments: